Another body suit project starts, too!

I wrote about the sample making process of [Body Suit for FUJIFILM X-Pro2] before, and now, a new project is under way!  It’s a body suit of that awaited camera of Sony, RX1RⅡ.  We have many inquiries from customers asking the camera case of this camera. Yes, we are making it:)  I am so relieved to see the actual camera since we have already started to make the 1st sample without the camera body in hand (again!) Thank you for your hard work, Sony.

We noticed Rx1RⅡ cannot wear our RX1 body suit when the images appeared on websites in November, so decided to make the new one.  As we told you before, shortly after this decision was made, the craftsmen of our production partner sent us the 1st prototype based on RX1’s shapes. RX1R2 has a variable angle LCD, therefore that prototype was widely opened both at front and back and the main feature was “grip” then.
Finally RX1RⅡ came to us and now we need to go through a major design review. I started from a paper mock up as my normal process. This is practically the 1st sample of RX1RⅡ.

The mock up has: a popper fastening for better fitting on its left shoulder seeing from the front, widely opened backside and covered front, a bottom flap to access battery space. The difference from the previous one is the design of right side. It covers up the camera as much as possible since we want the case to protect your precious RX1RⅡ. The 3rd aspect is also the must-have function for this big energy eater. 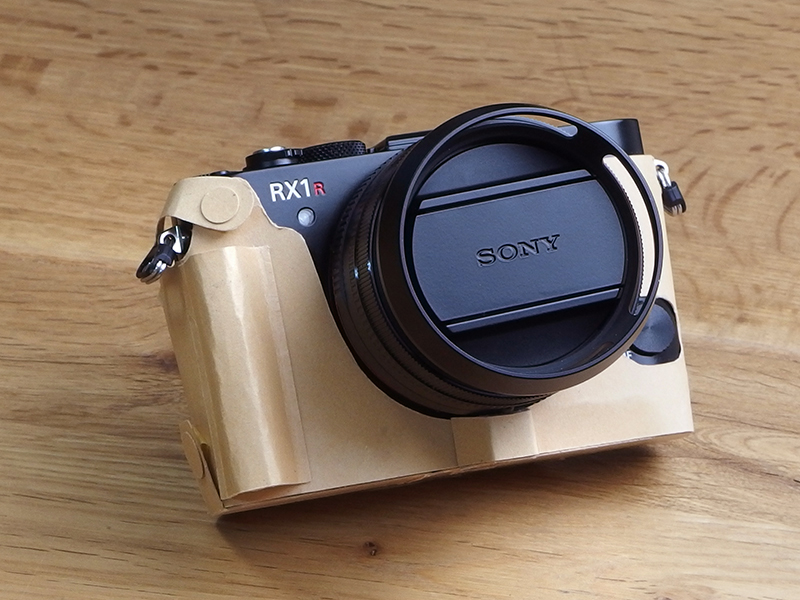 I can’t wait for the leather made sample!!